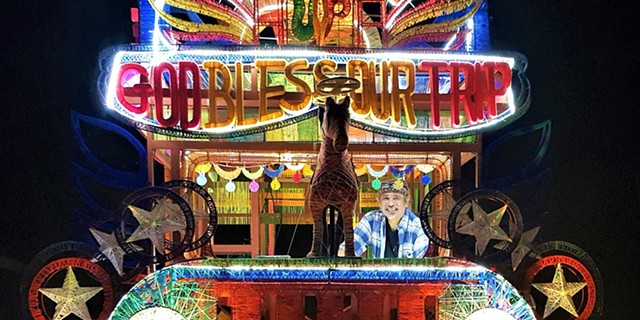 TOYM IMAO is a Filipino multi-media artist who excels in both sculpture and painting. Spanning an art career of more than 30 years, his works can be found in major cities in the Philippines, Vietnam, the USA and Europe.

He is a sculptor and painter in both classical and contemporary styles, a writer, set/production designer and film maker. He first trained in the arts under Philippine National Artists for the Visual Arts Napoleon V. Abueva and Abdulmari Asia Imao (his father). His formal training came from the University of the Philippines (B.S. Architecture, Masters in Fine Arts) and Maryland Institute College of Arts (M.A. Sculpture) under a Fulbright Scholarship. He studied film and apprenticed under premier Philippine director Marilou Diaz-Abaya. He credits his mentor National Artist for Literature Alejandro R. Roces for his passion for Philippine history and culture.

Toym started his career as an architectural designer and public art sculptor, designing and building monuments and shrines. His degree in Architecture gives him the design perspectives of a trained builder. Certainly, his architectural skills are indispensable as he builds more than life-sized statues and public art installations. His public artworks are always accomplished with masterful craftsmanship and display architectonic strength and historical depth. He takes delight in discovering little known facts and incorporating them in his artworks. Toym has received recognition from the cities of Manila and Quezon City for his contributions in the field of Sculpture. Some of his most notable works are the Tandang Sora National Shrine in Quezon City, the Andres Bonifacio National Shrine in Maragondon, Cavite, and the Dr. Jose P. Rizal statue in Carson City, California.

Toym’s art has evolved from the traditional monument-building that he does in the Philippines into the more experimental and contemporary. In the past ten years, pop culture has invaded his work. Using Japanese anime Voltes V, Mazinger Z and Daimos to tell narratives about Martial Law and the Conjugal Dictatorship, Toym has built massive art installations exhibited at the UP Palma Hall. For the past five years, he has worked with the UP OICA in mounting the annual UP Pailaw. His works remain relevant, truly original and palpably Asian.

Toym has exhibited at Cultural Center of the Philippines, the Metropolitan Museum of Manila, the Ayala Museum, and at the Lopez Museum. He was an Artist-in-Residence at the Creative Alliance in Baltimore, Maryland, and has also exhibited in galleries in Baltimore, New York City and Washington, D.C.

Toym has expanded his artistic horizon by being involved in film and stage. He is a Cinemalaya Best Production Design awardee for K’na the Dreamweaver and Gawad Buhay awardee for Set Design for Tanghalang Pilipino’s Mabining Mandirigma: A Steampunk Musical. He also designed the sets for Ballet Philippines' production of Crisostomo Ibarra and Simoun as well as Tanghalang Pilipino's Aurelio Sedisyoso, and Pangarap sa Isang Gabi ng Gitnang Tag-araw - Rolando Tinio's translation of Shakespeare's A Mid-summer Night's Dream.